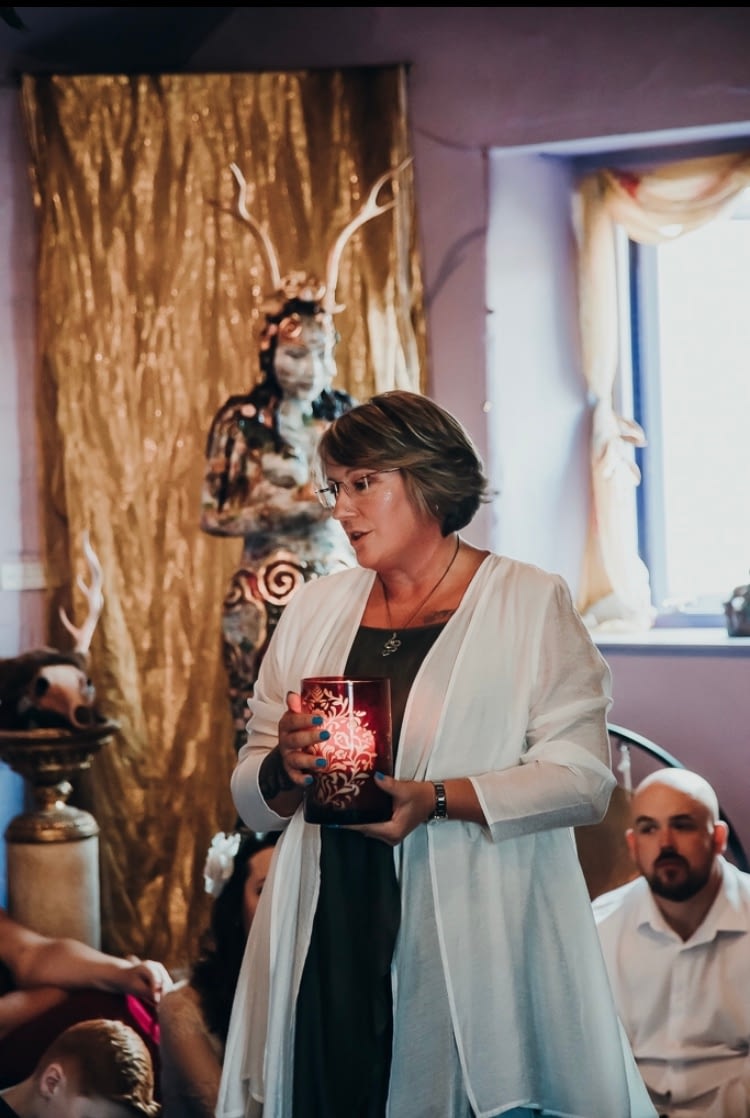 I had the absolute pleasure to talk to Mandy Kay, Priestess of Avalon, Sacred Celebrant of NOCN about her role as a Celebrant and as a Celebrant who also performs Handfasting.

You can find Mandy at https://beelovedceremonies.co.uk/

I kicked off the chat by asking, what is a Celebrant?

A Celebrant is someone who leads a wedding ceremony, they work with a couple to create and design a ceremony that is unique to them.  This type of ceremony is really considered to be a blessing, as the ceremony is not legally binding, so couples do need to have a legal ceremony, but this can happen at any point.

You don’t need to be legally married before having a Celebrant led ceremony.  As it’s not a legal process and this enables a greater freedom to hold the ceremony in more locations, such as private gardens, the beach or a place that is special to the couple.

Celebrant led ceremonies are not exclusive to weddings, they can be involved in naming ceremonies, renewing vows and funerals as in essence the ceremony is a blessing.

There are many different Celebrant led ceremonies, but Mandy focuses on hand fasting and

A handfasting has its roots in Celtic traditions and incorporates all 4 elements (earth, fire, water & air), water from the natural spring at Glastonbury Tor is used for the blessing and a hoop & wand to bind the couple together.

Both the hoop and the wand should be decorated and made personnel by the couple and kept secret from each other until the ceremony.

The handfasting ceremony strives to be inclusive and more of the guests can play a role within the service.

This can be from a reading, which is based on 1 of the 4 elements or special to the couple or be involved in the tying of ribbon around the couples hands.

Some guests can feel a little uncertain about the ceremony but in Mandy’s experience once it starts you can feel the love overflowing as the words spoken are from the couples heart.  The ceremony is more personnel and inclusive and can reflect the love the couple have for each other and the love that family and friends have for the couple getting married.

Mandy went on to explain that the couples that come to her are usually looking for something different and its generally not their first marriage.  She also mentioned that she has seen an increase in couples looking for something different over the past 10yrs with Celebrant led ceremonies becoming more widely known with wedding planners including celebrants in their supplier directory.  She also stated that you can find a celebrant via celebrant websites such as The Celebrant Directory, Humanists UK and the more mainstream Hitched.

Tips For A Happy Family Photoshoot

Having some professionally taken photographs of your family can provide you with precious memories for years to come. To make sure you get the most out of the occasion, it pays off to do a little planning and preparation first. Here are some tips to help you achieve...

After deciding to get married, your choice of venue is probably the next biggest decision you need to make! Maybe you already have a dream location in mind, or maybe you are just feeling overwhelmed by the pressure to make a ‘perfect’ choice. Whatever camp you are in,...